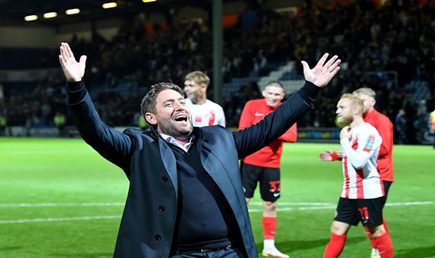 Carabao Cup Quarter Final preview: Sunderland march on with another trip to London, along with other all-premier league clashes.

League one side Sunderland have drawn Arsenal in the Carabao Cup after a dramatic penalty shootout away at Queens Park Rangers.

In the round of 16, Sunderland held QPR to a 0-0 draw at Loftus Road which led to a dramatic penalty shootout which included four missed penalties from QPR meaning the Black Cats were fired through to the Quarter Finals amongst seven Premier League sides. However, these seven premier league sides surprisingly did not include Manchester City, who won the Carabao Cup for the last four seasons.

Penalties converted for Sunderland by Aiden McGeady, Ross Stewart, and Alex Pritchard fired the Black Cats through to the Quarter Final, as the only League One side left in the tournament. Dreams will be high for Sunderland fans now, with not much to celebrate about in recent years, this is uplifting the whole club and the city. Lee Johnson’s Sunderland side took an impressive, loyal away crowd of nearly 3,000 from the North-East to Loftus Road for the tie which saw them win a dramatic penalty shootout. Sunderland AFC posted the following image on Twitter showing the enjoyment of manager, Lee Johnson.

Sunderland now face Arsenal in a mouthwatering tie as Sunderland look for a giant killing when they take on Arsenal at the Emirates stadium on the 21st of December. Is it too early for Sunderland fans to be dreaming of a trip to Wembley in 2022? Let us know what you think on our social media!

The other ties in the Carabao Cup Quarter Final were all premier league clashes which consisted of:

All three of these ties are interesting, Sunderland fans will be keeping an eye on these scores as they dream about carrying on this fantastic cup run all the way to Wembley in 2022 for the Carabao Cup final.

Brentford are particularly exciting in this tournament; they’ve shown in the Premier League this season that they are not afraid of the ‘big boys’ in the league by not shying away from their traditional attacking style against a hard opposition on paper. They will for sure look to attack Chelsea on the counter, who may still be without their two strikers in Romelu Lukaku and Timo Werner, who are still on the sidelines for an unknown amount of time. Brentford will surely look to utilise their own talisman in Ivan Toney against Chelsea.

All of these teams will see this as an exciting opportunity for silverware, especially without Man City in the tournament who have won it the last four years, as they were defeated by West Ham in the round of 16, but it can not be ignored that many eyes will be on Lee Johnson’s League One Sunderland AFC as they aim for a giant killing away at the Emirates against Arsenal.

Can Sunderland get another win in London and beat Arsenal? Could they go all the way in the Carabao Cup? Let us know what you think on our Facebook page @NEUpdatesSports!

“I could’ve been killed!”