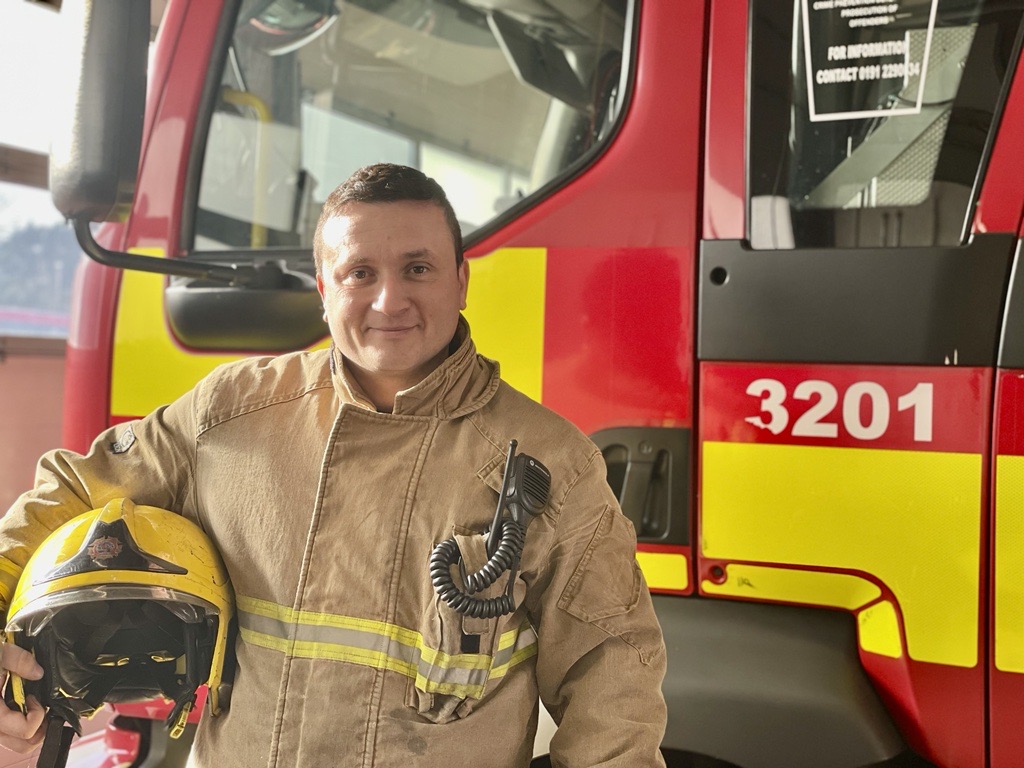 A firefighter who left his country after it was devastated by war is encouraging other immigrants to follow in his footsteps and enter into a career with the fire service.

Bahri Mustafa has been a loved member of the Tyne and Wear Fire and Rescue Service for 17 years.

The 40-year old fled Albania 20 years ago after war broke out and settled in Gateshead.

He spent 15 years serving his community in Gateshead before moving across the River Tyne where he is now stationed at West Denton Community Fire Station.

Soon after his arrival, Baz, as he is affectionately known by friends colleagues, fulfilled his childhood dream becoming a firefighter in 2005.

He was inspired to enter into the career after his father had to go to hospital suffering with severe burns when Mustafa was only young.

The father-of-two is calling on other immigrants who have settled in the UK to consider becoming a firefighter.

Mustafa said: “It was incredibly difficult to leave my home country once the war broke out, but I knew that I needed to in order to stay safe. It was scary and isolating when I first arrived in the UK but I found my place at TWFRS.

“My friend told me I should apply because I had all the qualities to make a good firefighter, I’m fit and passionate about safety and helping people and I knew it would be a good fit for me.

“So I applied and got through, the training was tough but I expected nothing less because it helps you realise every time you put on your fire kit the responsibility on your shoulders.

“I mean its 17 years later and if I could go back and do it all again I definitely would, I love this job my children are so proud of the work I do.”

Mustafa believes one of the most important skills as a firefighter is compassion and being able to be there for people at some of their lowest moments.

He said: “You have to really put yourself in people’s shoes in this job, you often turn up to a job and people are at their worst so you’ve got to think fast and change the way you speak.

“Interacting with the public is a huge part of what we do and you never know what’s going on in someone’s life so compassion is so important.”

On Tuesday one of TWFRS’s highest ranking firefighters thanked him for his service as well as encouraging others to join him.

Assistant Chief Officer, Lynsey McVay, said: “Its people like Baz who make our service so fantastic, they are so passionate about their roles and keeping people safe that it can be infectious.

“It doesn’t matter where you come from, it matters who you are and why you want to help people, that’s what we are interested in.

“We are continuing with one of the biggest recruitment drives we have ever had and want to encourage others to consider a career with us.

“Regardless of your age, gender, race, religion or sexuality, there is a home for you here in Tyne and Wear so get on our website and apply to become part of the team.”

Share
Related Topics:FirefightersTyne and Wear Fire and Rescue Service
Up Next

Northumbria Police crack down on car crimes and theft