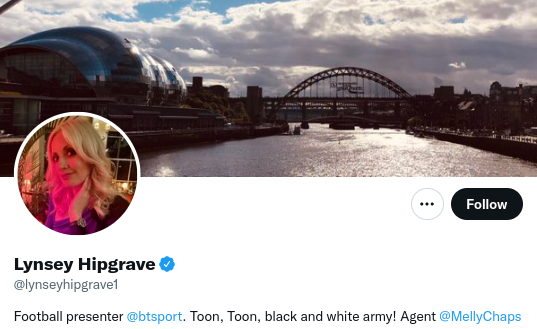 BT Sport have replaced long-running presenter Jake Humphrey with Newcastle’s Lynsey Hipgrave. Hipgrave will now be the lead presenter for BT Sport’s Premier League coverage from the start of the 2022/23 season this weekend.

Jake Humphrey has hosted Premier League football for BT since it first came to the channel in the 2013-14 season. As well as this, he regularly presents their Champions League and Europa League coverage.

The role is a promotion for “football mad Geordie lass” Lynsey Hipgrave, who has been a secondary presenter for BT Sport since 2013. Her previous role was to present on other matches if BT were broadcasting multiple games at once, and to present Europa League coverage. With Humphrey’s departure, Hipgrave will now receive top billing.

Hipgrave compared her promotion to the progress women in football have made with England’s Euro 2022 success. She wrote that “after a weekend of dreams coming true for women in football, the dreams of a football mad Geordie lass have also come true.”  Hipgrave, 42, even has “Toon, Toon, black and white army!” in her Twitter bio, with her cover photo a picture of the Quayside.

After a weekend of dreams coming true for women in football the dreams of a football mad Geordie lass have also come true… I couldn’t be any prouder to be leading @btsport’s Premier League coverage this season 🥳 We KO with Fulham v Liverpool on Saturday at 11.30am @btsport 1 ⚽️

Initial reports suggested that BT Sports had ‘axed’ Jake Humphrey. Humphrey hit back at “misleading nonsense headlines”. He clarified that he will continue to host some coverage, including Champions League football for BT, and the decision came after he held talks to reduce his busy schedule. Hipgrave, however, will take over the top spot in the presenting team.

Humphrey showed that there is no ill will in his response to Hipgrave’s announcement: “You’re going to be amazing Lynsey. So delighted for you. Please just let me back for the odd game.”

Yes. Ignore the misleading nonsense headlines. I spoke to BT about being too busy and we agreed I’d host less PL games.

I’ll still host some, but one of my favourite people @lynseyhipgrave1 gets to lead the coverage and I couldn’t be happier for her. 🙌 https://t.co/U4MWdCZguS

Lynsey Hipgrave, born in Newcastle and a Magpies fan, first made her name on Radio 5 Live, co-presenting on the Danny Baker Show since 2010. She has also hosted sports coverage for Al Jazeera and ESPN. She will host her first game in the new role, Fulham vs Liverpool, this Saturday.

Newcastle United fans will hope her appointment might lead to some more favourable coverage of the club in future.

Our top picks ahead of Newcastle’s restaurant week