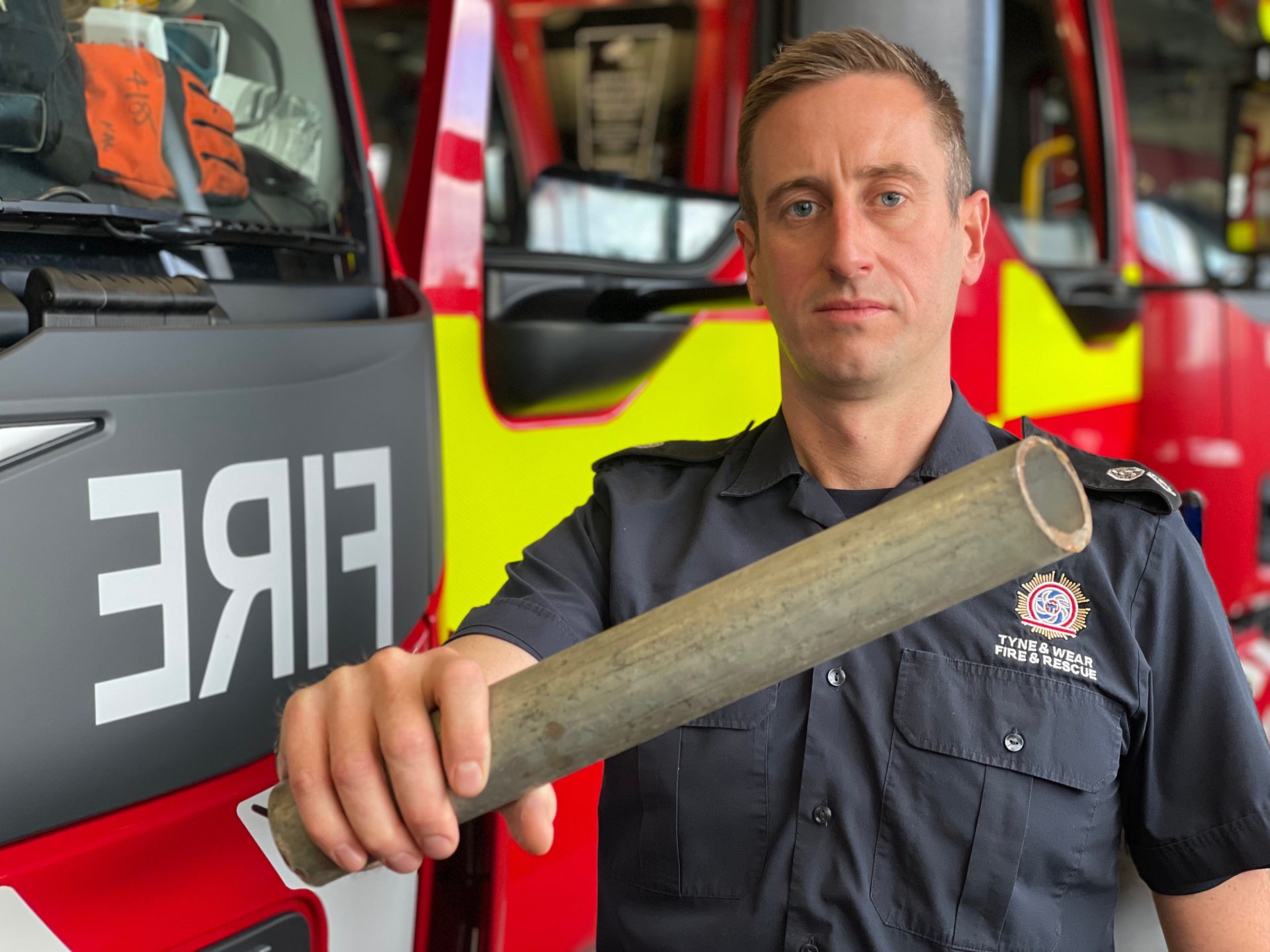 In the build up to Bonfire Night – as the darker nights draw in – a firefighter who was nearly killed when a scaffolding pole smashed the window of his fire appliance reflects on the horrific incident and pleads with troublemakers not to attack emergency service crews.

In the early hours of August 31 [2019] a crew from Byker Community Fire Station were attending a road traffic collision in Walker.

It had been reported that the vehicle had flipped on to its roof – and the occupants were still trapped inside.

The Tyne and Wear Fire and Rescue Service appliance had its blue lights and sirens in full operation when a cowardly act took place.

Watch Manager Graeme MacDonald was in the cab when somebody viciously threw a twelve-inch scaffolding bar at the windscreen.

“I could’ve been killed or seriously injured,” said WM MacDonald.

This incident is being highlighted at one of the busiest times of the year for Tyne and Wear Fire and Rescue Service (TWFRS) in the run up to Bonfire Night – where incidents of anti-social behaviour (ASB) and attacks on firefighters are rife.

This was recently reinforced as TWFRS disclosed that since the start of 2021 there have been 50 ASB attacks on firefighters in the area.

WM MacDonald, said: “Think about what you are doing before you act: at the end of the day, I want to go home and see my family. I’m married with children and I want to safely return to my wife, son and daughter.

“I also want to make sure that my crew are safe as well. It’s not a game. It’s not fun. Incidents of anti-social behaviour create significant implications and what those individuals are doing has a real effect on people’s professional and family lives.

“Not only do their actions have consequences but it also means that the fire engine isn’t available to attend other incidents. It also has cost implications for the public.

“The incident I was involved in has stayed with me, and I wouldn’t want any other crews up and down the country to experience the same ordeal.”

WM MacDonald, aged 36, is North East born and bred.  Graeme, who lives in North Tyneside, comes from a long line of proud and passionate firefighters. He followed in the footsteps of his father who also served in Tyne and Wear.  The family connections don’t stop there as Graeme’s grandfather was in the Auxiliary Fire Service, and his uncle served as a firefighter in the south of England.

Graeme has been with Tyne and Wear FRS for over eleven-years and has served at five community fire stations including Byker, Newcastle Central, Low Fell, Sunderland Central and Wallsend.

He continues: “The incident made me feel like I wasn’t valued by the local community and I know that isn’t true. But it made me think if they could attack us in this way, then who else could?

“Firefighters are here to help the local community and that’s what this job is all about at the end of the day.  Whether individuals make the wrong decision in the heat of the moment that’s not for me to argue.  It’s for me to turn up for work and do my job to the best of my ability.”

“Any attacks on firefighters and other emergency services colleagues on Bonfire Night or any other night of the year is unacceptable. We aren’t just talking about a person risking their life day in, day out. We are talking about a real person – someone’s loved one – who wants to serve their community and return home safely after work.

“Firefighters, like all other emergency workers should be treated with respect and dignity, in the manner they deserve.  These acts of violence against our crews won’t be tolerated and the individuals responsible for these actions will be brought to justice with help from our partners.  Please be careful this Bonfire Night and recognise the work and commitment the emergency services make to keep you all safe from harm.”

Graeme MacDonald, concludes by giving some advice ahead of Bonfire Night. He said: “My advice would be to stay safe. Go to an organised event and don’t engage in any anti-social behaviour – particularly attacks against the Fire Service and other emergency service personnel as you never know when you might need our help.”

If you have any important information about deliberate fires being ignited in your local community – you can report the details anonymously by calling Firestoppers on 0800 169 5558 or by reporting it through their website www.firestoppersreport.co.uk

Follow us on social media to stay fully to up date with all North East Updates..