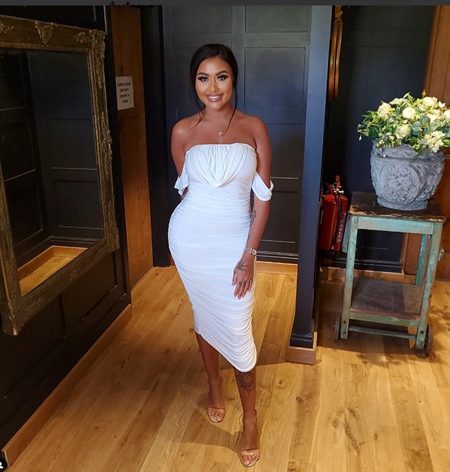 Controversial Nikita Jasmine was kicked off Married at First Sight earlier this year because of her inappropriate behaviour.

The 27 year old, from County Durham, was left livid after seeing the groom the show’s love experts had chosen for her to marry.

The star’s antics included swearing at the altar, blazing rows and an off camera incident where security reportedly had to get involved, resulting in her being axed from the show.

Earlier in the programme Nikita, who now boasts over 71 thousand instagram followers, asked the show for a ‘six foot man with green eyes and veneers’ speaking to the camera during the show Nikita ‘They’ve just done the total f***ing opposite of what I’ve asked for.’

Viewers called for her to be kicked off the show after an explosive argument led to the model throwing a take away coffee cup at her husband Ant Poole.

Members of the public took to social media to call out Nikitas behaviour, one viewer saying, ‘Narcissistic alarm bells are ringing so loud… get the poor boy out of this relationship. Nikita is absolutely toxic.’

Nikita, who has Thai heritage, joined the upcoming 10th series of the Celebs Go Dating programme; which began airing on the 18th of October.

The dating show, which began in August 2016, has previously had celebrities such as Olivia Atwood, Joey Essex and Tom Zanetti.

What are your thoughts, join the conversation on our social media below..

Local mum left with serious injuries after being spiked