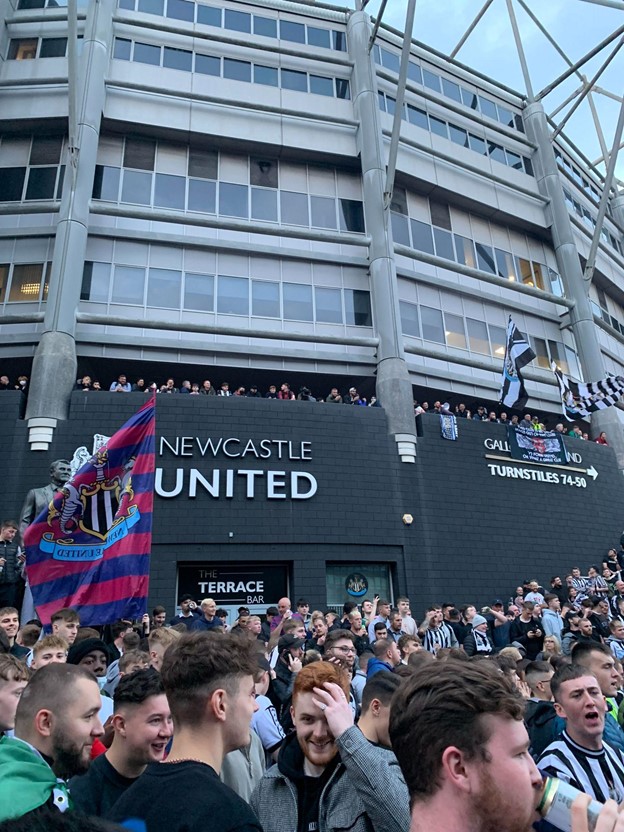 Newcastle fans prepare for the first game of new era without Sports Direct signage at SJP...

Six fixtures have been postponed over the weekend following the rise of cases due to the Omicron variant with the likelihood of many more fixtures being affected in the coming weeks.

At the time of writing, the game between the Magpies and Man City is still going ahead. Sunday promises to be a challenging battle for the home side as the visitors ran rampant last time out, winning 7-0 at home against Leeds in midweek.

Perhaps the most important detail heading into this fixture is that for the first time since Mike Ashley’s departure in October, the Sports Direct advertising that previously covered the ground has been removed fully with a new era officially starting on Tyneside.

Howe will be looking to build on the decent performance against Liverpool, despite defeat and will be expected his side to get on the front-foot as much as possible. The defensive woes continued for Newcastle on Thursday evening as they gifted Klopp’s side their first two goals.

Newcastle find themselves 19th with the worst defensive record in the Premier League and remain in desperate need of improvement on the pitch. The Magpies have shipped 37goals in 17 outings this campaign, running at an average of over 2 goals per game.

The January transfer window beckons and can’t come quick enough for Howe’s side who are expected to bring in a number of reinforcements.

After being rested on Thursday, Callum Wilson is expected to return to the starting eleven as Newcastle are yet to confirm the extent of the injuries they sustained against Liverpool. Allan Saint-Maximin and Jamal Lewis (hamstring) had their games cut short and are doubts for the clash with City.

Howe’s side have averaged the lowest percentage of possession across all Premier League games this season, suggesting that they are going to endure long periods of pressure from their visitors and will rely heavily on counter attacks to threaten the City net.

This is to be expected given the difference in quality between the two sides but Toon supporters can still expect their team to be well-drilled, structured and hard-working.

Man City have won seven consecutive games in the Premier League with two clean sheets in a row – Pepe’s side have the best defence in the division having only conceded nine goals so far this term.

City seem to have found it tricky at St James’ Park in recent years for various reasons and they have not yet taken Newcastle apart on the road – could Sunday afternoon be a different story come 2pm?

The hosts will be hoping for a Christmas miracle to help kickstart their season after the first win over Burnley last tine out at SJP.

The fixture on Sunday afternoon is between the two richest clubs in the Premier League and has been nicknamed as El Cashico as the sides compete for the first time since the Saudi-led take-over of Newcastle in October.

Newcastle will assess the fitness of Allan Saint-Maximin, who was withdrawn during the defeat at Liverpool. Jamal Lewis is sidelined because of a hamstring injury sustained at Anfield but Callum Wilson is expected to return to the starting eleven after starting on the bench in midweek.

Paul Dummet (hamstring) remains a lengthy absentee and isn’t expected back in action until 2022 at the earliest. Centre-back Federico Fernandez (thigh) is not expected to return from a knock that he sustained earlier this month.

Bernardo Silva is a doubt for Man City after being substituted off at half time against Leeds as a precaution, and Guardiola may rest the Portuguese international having played every minute of every game since the beginning of November.

Joao Cancelo returns from suspension having missed out on the 7-0 demolition of Bielsa’s side on Wednesday evening. Kevin De Bruyne is expected to start his second consecutive game as Phil Foden is expected to replace the doubtful Silva.

Who makes your starting eleven? Can Newcastle pull off a Christmas miracle? What are your thoughts on the El Cashico? Will Howe’s side put in a decent performance at SJP?