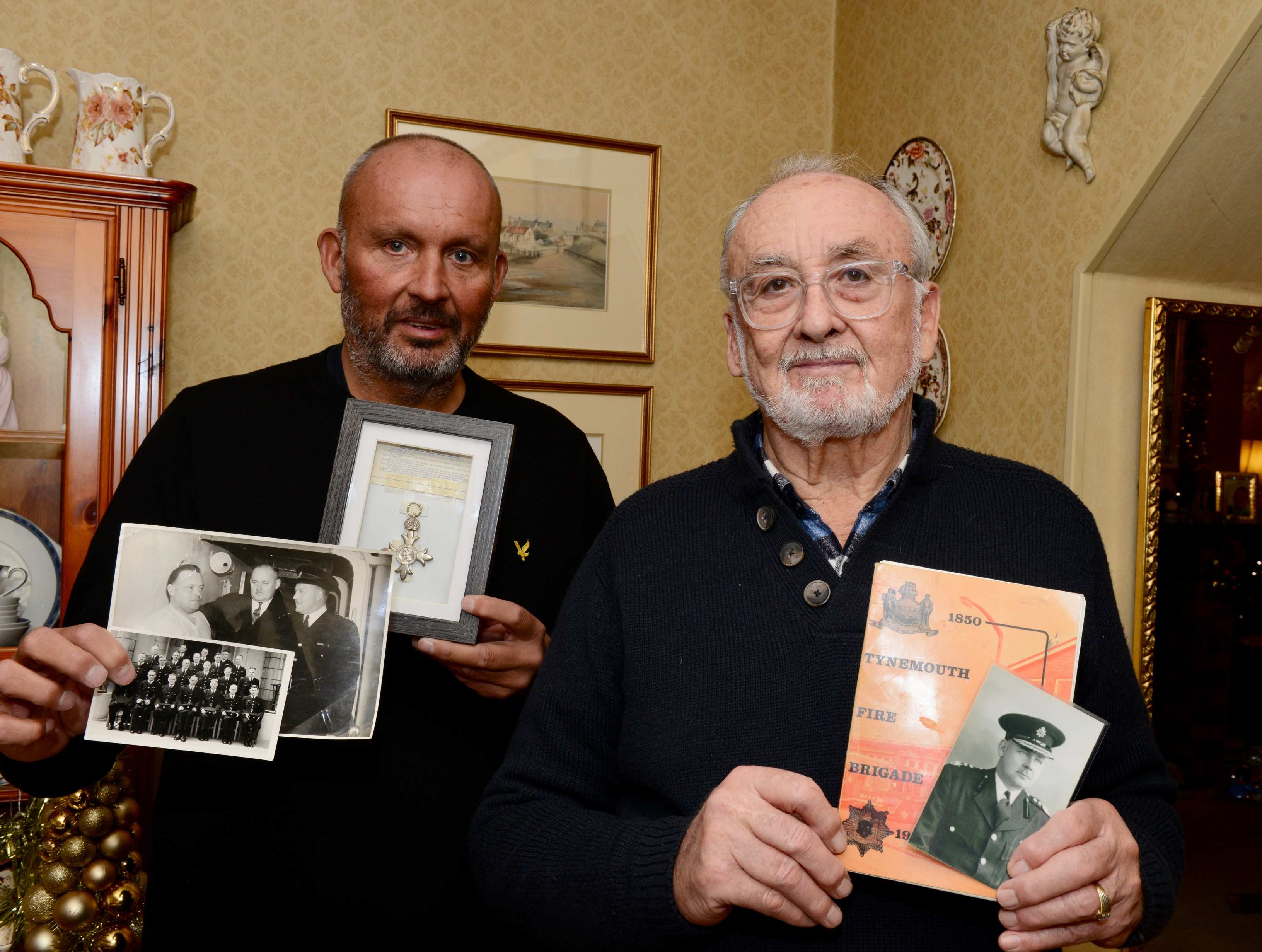 30 years later and Wilfred Andrews Snr has not been forgotten.

The North East community still remember his remarkable work in both law enforcement and the fire service.

Sentimental treasures recently rediscovered by his family brought back fond memories of the local legend.

Wilfred Andrews Snr launched his career in 1932 as a Police Constable, walking the beat in Tynemouth. Fast forward 13 years, and his hard work had paid off. Successfully climbing the ladder, he became the Company Officer in Charge of Tynemouth Fire Station.

Wilfred Andrews Snr’s efforts didn’t go unnoticed. His devoted service to his local community earned him an MBE from Her Majesty the Queen when he was 48.

Wilfred Andrews Snr while he worked for the emergency services
Credit: Tyne and Wear Fire and Rescue Service

Service Delivery Manager for Tynemouth Community Fire Station, Martin Farrow, said: “It was a great privilege for Wilf, Scott and his family to share their special nostalgic memories with us.

“We are very proud of our fire service heritage and especially of people who’ve made such a difference in yesteryear that has helped us become what we are today. Mr Andrews was obviously deeply regarded by the local people for his achievements to be recognised by Her Majesty the Queen with the MBE.

It was made extra special as Mr Andrews’ accolade uniquely bridged both the Fire Service and the Police – representing two areas of the blue light family and showing the dedication he had towards the communities that he served.”

He organised, controlled and trained the Auxiliary Fire Service, Police and Fire Brigade in Tynemouth and took charge of the Division of Tynemouth, Wallsend, Blyth, Whitley Bay, Seaton Valley, Longbenton and Forest Hall throughout the war.

Wilfred Andrew Snr protected the region he called his home right from his birth in Blyth to his passing, clearly proud of his North East roots.

After his retirement from the emergency services, he ventured into other avenues, including working with his family in the local amusement trade, also as a chief security officer. He had three children, Wilfred, Una and Michael, from his marriage with Margaret. After Margaret’s passing, he later remarried Kathleen.

Wilfred Andrew Snr’s final career move was becoming the landlord of The Three Heads in Thropton near Rothbury.

Wilf Andrews and his son Scott Andrews recently stumbled across a “box of delights” holding “priceless memories” of his impressive life. The family shared the precious photographs with Tyne and Wear Fire and Rescue Service in North Tyneside, as well as the history they’ve recently discovered by exploring the British newspaper Archive.

The photos are now proudly displayed in Wilf Andrews office beside Wilfred Andrew Snr’s MBE, the Certificate from Her Majesty the Queen and the heritage items of the Defence medal.

Wilf Andrews said: “As a little lad growing up in North Tyneside I had to always keep my nose clean and be careful what I did as everyone knew my dad.”

Until he was three, Wilf Andrews lived in North Shields Fire Station: “It was quite good growing up in a fire service family. I used to go down to a number of the fire stations with my dad.  I loved all of the different yarns he used to spin about the fire brigade including dramatic stories about some of the fires he’d attended.

“I remember him talking about when he collected a brand new fire engine and drove it all the way up to the North East. Excellent memories!

“I knew all of the firefighters that used to work with my dad. They were lovely fellas. I used to have a good craic with them. Everyone seemed to admire my dad. They all talked about him in a good way.”

Wilf added: “I’ve always been very proud of me dad, and for what he achieved.  People used to come up and tell me what he was like during the war.

“He seemed to be a courageous type of guy, and when he died, a Police Inspector said some nice words about him – saying that he was always the first person in when there was a fire and he would rally the crews by telling them ‘…come on lads let’s get it sorted.’”

Wilf Andrews described the impression he got from his father was that “he was never ever intimated by anybody,” believing this bravery is how he managed to accomplish what he did.

The stories of Wilfred Andrews Snr have been passed down to his great grandchildren.

Scott Andrews said: “When the bairns were little, for Show and Tell, they would proudly take family memorabilia to school about their great grandad Wilfred. Their class mates always liked to hear the fascinating stories passed down through the generations about the police and fire service.

“It’s all about the importance of family.  We are always talking about our grandad as he’s an integral part of our history. We’re extremely lucky to have someone who lived life to the full and had an amazing lifetime of stories to share with us.”

The beloved father, grandfather, great grandfather and emergency service hero continues to be a “respected pillar” of the community.

Follow us on social media for all North East Updates!