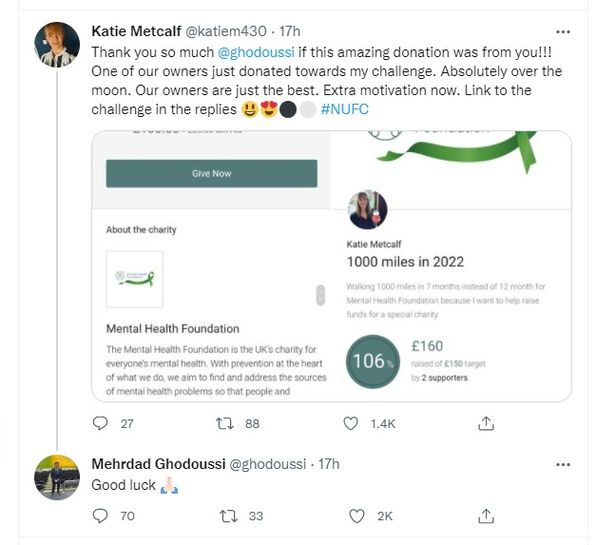 Mehrdad Ghodoussi made a generous donation to help a Newcastle fan who is attempting a 1,000-mile run for a mental health charity.

Katie Metcalf had no idea her challenge to cover 1,000 miles in a year for the Mental Health Foundation would catch the attention of Newcastle’s new owners when she started it earlier this month.

But that’s exactly what happened when Mehrdad saw the appeal and donated £100 to Katie’s Just Giving Page, even leaving a message wishing her “good luck.”

“I received an email notification from Just Giving last night to say a new donation had come in,” Katie said.

“I took a look and saw the donation had come from Mehrdad.

“I couldn’t believe it at first, but he replied to my Tweet thanking him too, to wish me luck.

“I was absolutely over the moon.

“My husband and dad are also huge Newcastle fans, and they were both ecstatic.”

Following her own mental health struggles, the 28-year-old from Durham has begun the New Year by walking, running, and cycling to raise funds for the charity.

Although the goal is to complete the journey in a year, Katie hopes to do so in seven months.

“Like many, I’ve suffered with my own mental health difficulties and wanted to do my bit to help raise awareness and to encourage people to look after their mental health,” she said,

Katie has now reached over £450 in donations, and we wish her the best of luck!

Police appeal after 12-year-old knocked over in Denton