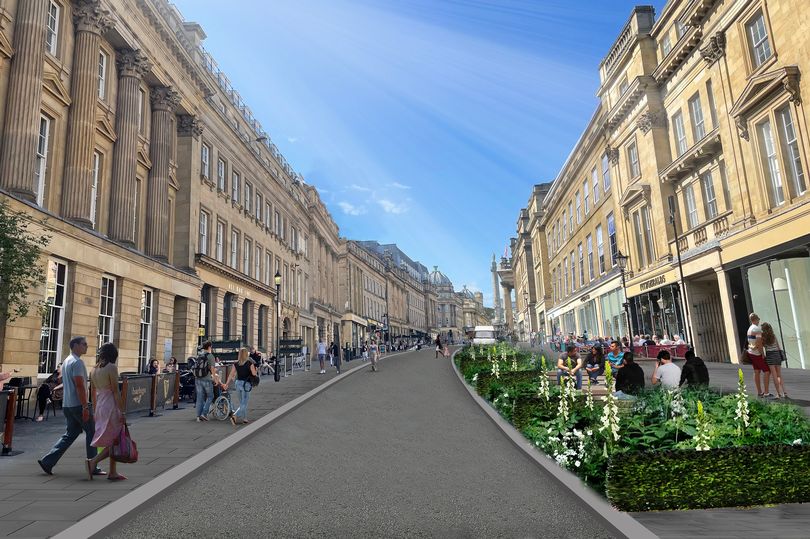 It is hoped that work will start later this year on the latest stage of changes to the beloved Georgian thoroughfare, which has been rethought after a backlash from cyclists.

Council bosses unveiled their vision to remove all traffic from Grey Street in Newcastle just over a year ago, the headline act in a proposed £50m overhaul of the city centre. A temporary redesign of the beloved Georgian street has been in place since 2020, with road space given over to create more room for cyclists, pedestrians, and pavement cafes during the pandemic.

The next phase of the scheme will see all pay and display parking spots and taxi bays axed from the iconic thoroughfare. Latest designs, which are currently out to public consultation, show Grey Street with a single lane of road that would be for southbound traffic only – with significantly widened pavements on either side and a new seating area surrounded by plants. Four new loading bays will also be installed to give vehicles access to local businesses.

A council spokesperson confirmed that the ultimate aim is still to fully pedestrianise Grey Street, though its transformation is now planned to happen in just two phases rather than the original four. It is hoped that work on this stage of the scheme will begin later this year.

In January, cyclists complained that they would be effectively banned from riding up the street because the council’s plans axed a northbound cycle route. But transport chiefs have now rethought the proposal and will include such a provision, although it is not shown in the concept image released by the local authority.

Sally Watson, of the Newcastle Cycling Campaign, said: “We are extremely pleased to see that the council has reinstated two-way cycling on the most recent plans for Grey Street. The city centre desperately needs more streets like this which are safe for cycling so that more people can use this inexpensive and climate-friendly form of transport.

“Given the likely low levels of traffic on the street, this new layout should work well. We’d love to see continuous pavements running the length of the street so that pedestrians have an equally high quality environment.”

The council’s vision for the city centre also includes removing all traffic from Blackett Street, though that is subject to the outcome of a public inquiry triggered by opposition from bus companies. Designs were also revealed last week for a proposal to pave over Hippy Green, while the regeneration of Northumberland Street will include the installation of 11 50ft-tall lighting pillars.

Metrocentre Shoppers Were Shocked As Knife Fight Broke Out