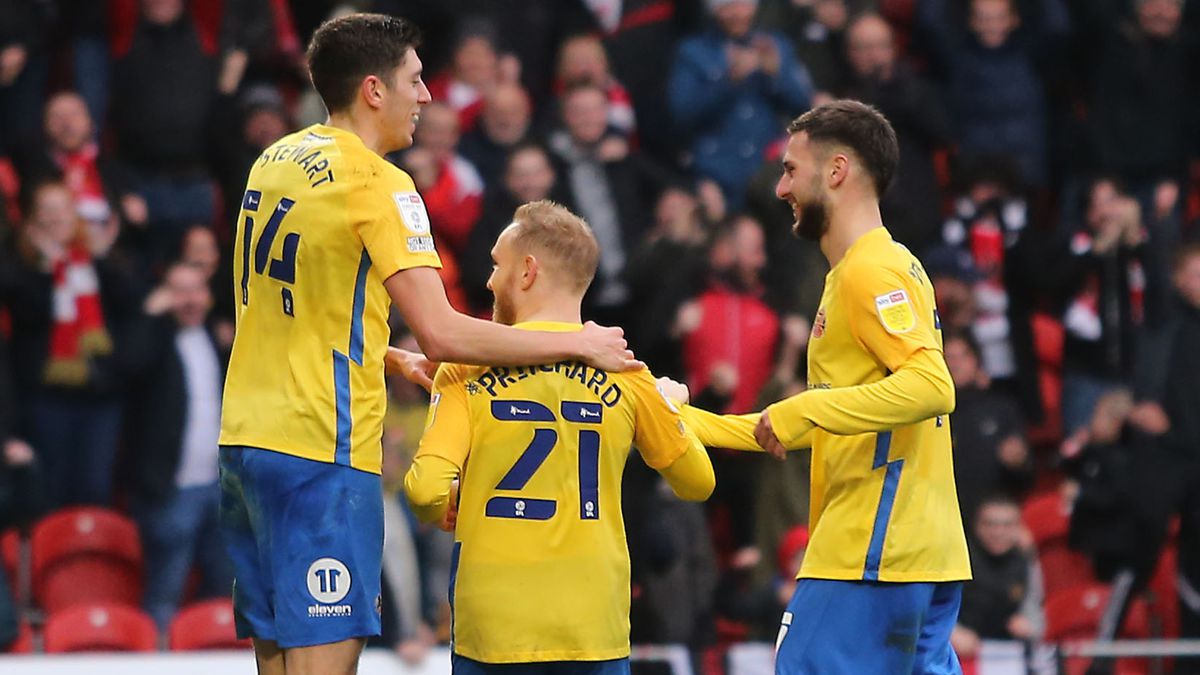 Sunderland win 3-0 away at relegation-threatened Doncaster to move into second in League One and are just a point adrift of table toppers, Rotherham.

It was a routine victory for Johnson’s side who showed their class throughout, making the contest a very one-sided affair. The away end was sold out once again as Sunderland supporters watched their side dominate and extend unbeaten league run to eight games.

The Black Cats move into second place and leapfrog Wigan who’s Boxing Day fixture was cancelled due to a rise in Covid cases.

Ross Stewart netted his 12th of the season as Elliot Embleton made it two just before the break.

It was three early in the second half as Pritchard’s flick deflected off a Doncaster defender before hitting the back of the net.

Sunderland put the pressure straight back on their rivals with the win on Monday afternoon and are one of the most in-form teams in all four English divisions. Johnson has his side playing front-foot, attacking and exciting football in recent times which has shown why Sunderland are most pundits’ promotion favourites.

It was an emphatic win at the Keepmoat…

Leon Dajaku received the ball just outside the box on the right as he dribbled into the danger area before being clipped. The referee pointed to the spot and top-scorer Ross Stewart calmy converted from twelve-yards to make it 12 goals so far this campaign.

Sunderland were on-top for the rest of the half and had a number of decent opportunities to double their lead. Alex Pritchard sent his free-kick narrowly wide from just outside the area on the right before Dajaku had his effort blocked inside the 18-yard box after another mazy dribble.

The second goal came just before the break when the away side took advantage of some poor defending as Rovers put themselves under unnecessary pressure after giving the ball away cheaply inside their own half.

Pritchard’s cross from the side of the box, after a quickly taken free-kick, found the onrushing Elliot Embleton who skilfully hit the ball on the volley and passed goalkeeper Jones into the empty net.

After taking their 2-0 lead into half time, the points were all but secured as the Black Cats controlled proceedings in the second period. An own-goal from Ben Blythe early in the second 45 completed the job as they cruised to victory and made it three.

Gooch was given time and space on the Sunderland left before his cross hit youngster Blythe, after the ball was diverted goal-wards by Alex Pritchard’s impressive flick.

It was a second clean sheet in four games for Hoffmann after conceding in the previous two League games.

The Black Cats continued to purr and could have made it four or five in the closing stages. Embleton hit the woodwork following his impressive dribble and drilled shot which hit the top of the post before going wide.

The visitors had the ball in the net once again as substitute Denver Hume was on the end of a perfect cross from the right, only for the linesman to have his flag up. Johnson was able to bring off key players towards the end as Sunderland extended their unbeaten run.

The Wearsiders face Sheffield Wednesday at home in three days time and know a win would keep the pressure on their promotion rivals. Sunderland lost 3-0 in the reverse fixture against Wednesday back in November and will be looking to get revenge on the Owls at the Stadium of Light.

“There was some really good stuff. I suppose the standard setter in me wants more at times but given the circumstances it was a difficult game for us and for Doncaster as well due to a lot of injuries and the covid situation.

“I thought once we got in our rhythm, we moved the ball around nicely and we got some really good players – Embleton, Neil and Pritchard will have enjoyed themselves today. We let them (Doncaster) off the hook a couple of times, especially in the first half, where we tried a killer pass to early. It was nice to get the third early in the second half, it settled us and overall I am very pleased with the result.”

“It was good to get the goals we did, infront of a big crowd who were expecting it settles the nerves, especially the first one and then the second goal just when it was getting a bit edgy as Doncaster started to get into it a little bit more.

“Obviously the third pretty much seals it for us, and enabled us to rest a couple of players going into a big game in three days.”

“We had to be professional today. We had to find some control and obviously the early goal did us a right favour. Then we left them off the hook a bit but the second goal was really good timing for us because it was getting a bit frustrating. It’s a really big three points. We had to capitalise on closing the gap (to leaders Rotherham) and we did.”

Post-match thoughts? Who was your MOTM?

Can Sunderland finally gain promotion back to the Championship? How impressed were you by Johnson’s side today?